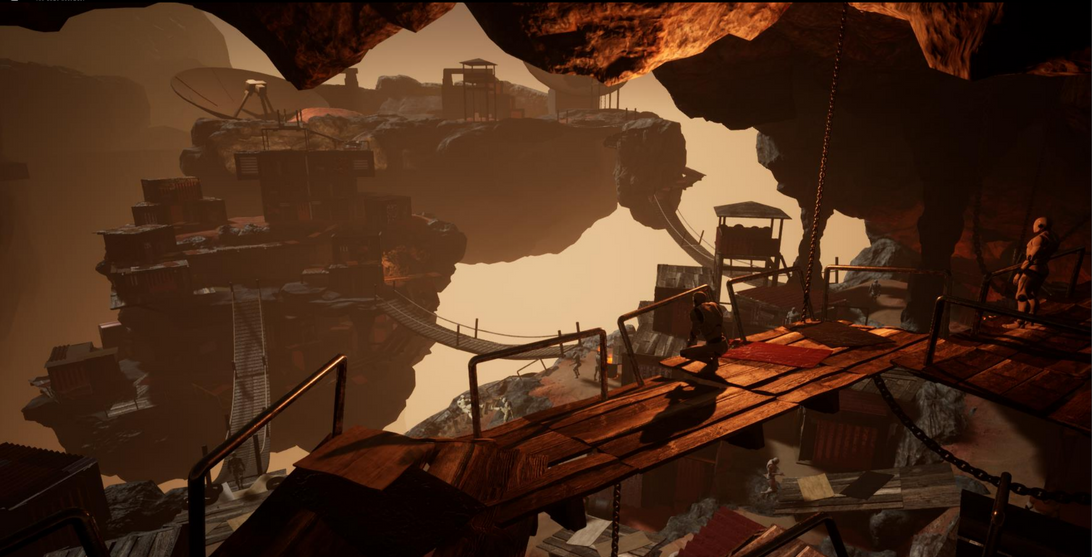 The assignment was to create three separate floating islands that had to be connected to each other.
After some planning I decided to create a Hub-area in a fictitious game since I felt that would fit the level flow best in such a small area and time frame.

Perspective sketch over the settlement island

First blockout of the settlement island

The world of Palmeia has fallen, and solar magnetic disturbances has caused whole mountains to crack and float freely in the air. The few survivors are forced to scavenge to survive, or get captured by raiders only to be put into labour-camps or killed.

The first step in this project was to create a "valid" backstory to the apparent phenomenon.
When I had something to go on, I started with some sketches over the different Islands and made some perspective-sketches over what I wanted the player to see when they were looking at each island.

When the blockout was finished, i started iterating on the islands to improve the flow as well as views from each area.

However, during this process I decided to hastily apply some different materials to some meshes which resulted in a huge downgrade in readability. 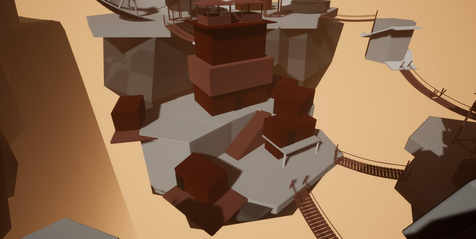 Whitebox of the settlement Island 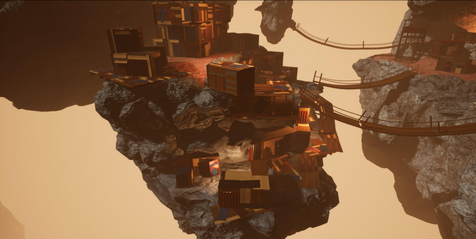 This mess was reduced in the last sprint where we were meant to focus in on one of the islands and take it (graphically) as close to gold as possible.
I'm glad that I made these mistakes however, as it taught me to plan future assignments better to avoid messy scenes and levels. 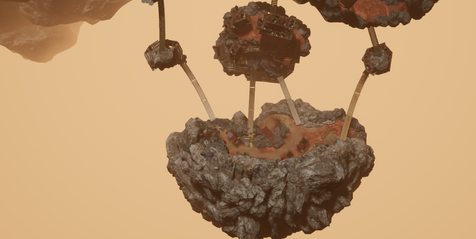 I decided to focus on the most interesting island, namely the settlement. I feel like the other islands would need some more iterations and since time was limited i decided to go with the more complete one.

As this was an early assignment at TGA I learned quite a lot. Mostly about planning, but also what works and what doesn't when it comes to design-choices. 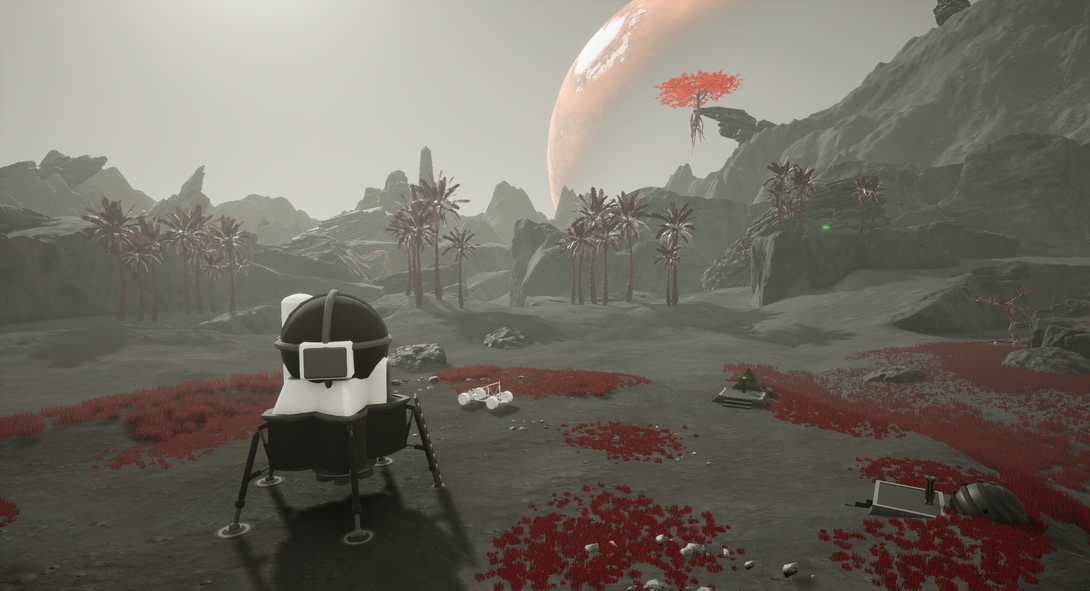 This assignment was about creating a "fully playable" open world experience with implemented gameplay.
Some kind of vehicle/mount had to be implemented in order to speed up traversal, which meant that the playable area had to be large enough to encourage vehicular travel.

Since I had already made several projects with a somewhat medieval theme, I decided to step out of my comfort-zone and create a sci-fi world. 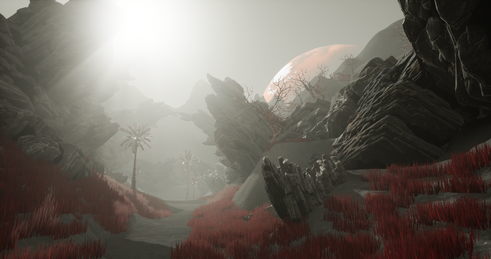 The player lands on a desolate planet, looking for an alien relic known as an archive. However, orbital scans of the surface have proven fruitless and the player has to investigate the planet from the surface.

As they move through the barely charted valley they soon find strange objects that seem to have a connection to the archive...

The player will have to collect each object from three different locations and slot them into three pedestals close to the landing site. Once all objects have been placed a path towards the archive opens up. 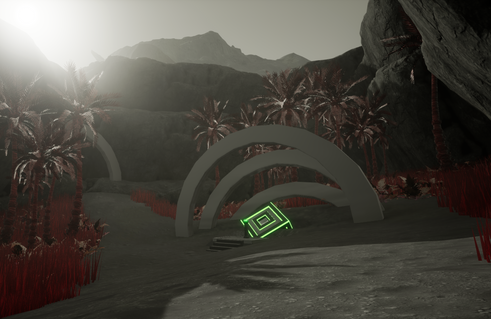 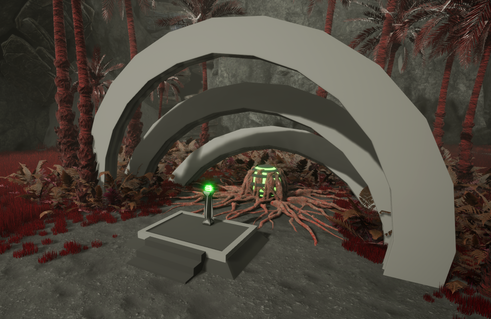 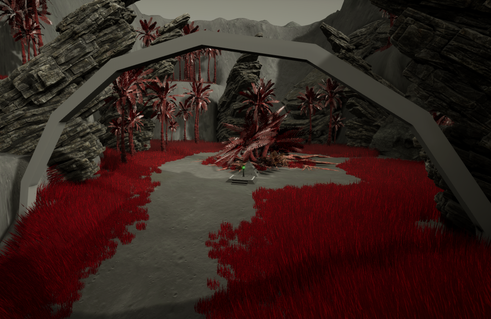 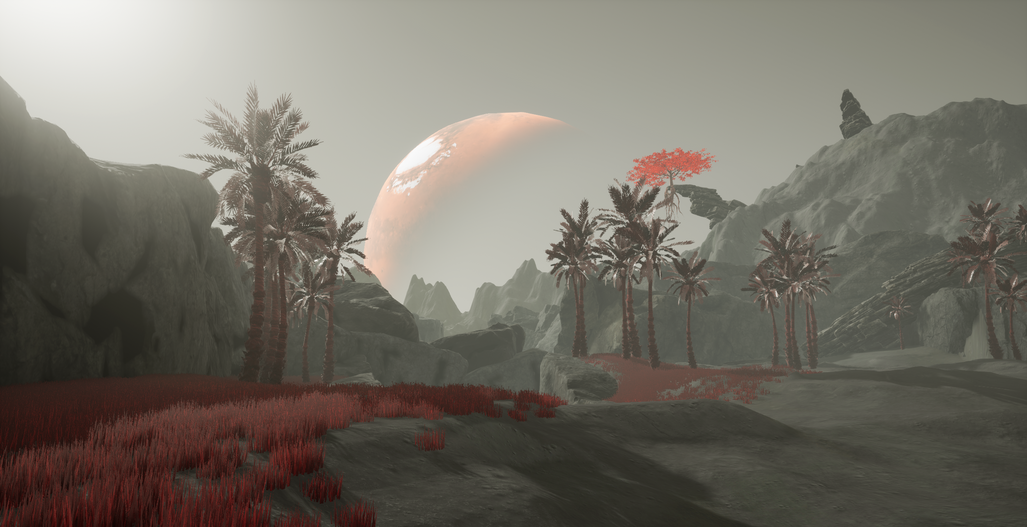 However this felt all too limiting for the player and I chose to scrap the oxygen-system completely in order to promote exploration without punishment.

Since I wanted the different activated obelisks to have different impacts on the level I set up an ID-system where I could tag each obelisk with an ID that corresponded to a matching pedestal and key.

If I had more time to spend on the blueprints I would have created a better system to handle different events as this system wasn't as flexible as it could have been. It would work as a prototype, but not as a game-ready product.

The player interacting with different pedestals and activating the corresponding obelisk in order to gain access to the vault.

The player approaching the vault where the Archive can be retrieved.

Collection of screenshots from various projects